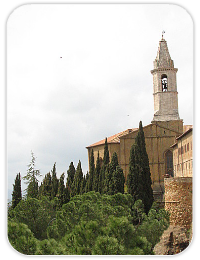 In fact the city was nothing but a small village until 1462, known as Corsignano. The event that changed the fortunes of Pienza in 1405 was the birth of Enea Silvio Piccolomini, who 53 years later became Pope Pius II. Just a trip to Mantua the pontiff led him to cross the birthplace and degradation he found led him to decide on the building above the old town, entrusting the project to Bernardo Rossellini construction, which lasted about four years and led to the a light and harmonious town with typical fifteenth-century forms. The premature death of Pope Pius II closed the history of the town since then has remained almost unchanged. Pienza is one of the city decorated for Valor for the War of Liberation because it was awarded the Silver Medal for Valor for the sacrifices of its people and its activities in the partisan struggle during the Second World War. For the beauty of its historical center Renaissance Pienza in 1996 became part of World Heritage natural, artistic, cultural heritage, followed in 2004 by the same valley area in which it stands: the Val d'Orcia.